learning to be a mom one twist at a time

thinks the weather lately is a little fishy. from Facebook
via IFTTT
Posted by Unknown at 7:59 AM No comments:

told me that she wants to be a music teacher when she grows up (when she's 16) and live in Paris. #goals from Facebook
via IFTTT
Posted by Unknown at 2:58 PM No comments:

is having a pickle relish sandwich, with cheese and turkey on the side. from Facebook
via IFTTT
Posted by Unknown at 10:52 AM No comments:

Some good old Devyn quotes and memories from the past year:


This morning Devyn said, "Why are we wearing green? Shouldn't we wear hats for Saint Hatrick's day?"


Devyn just asked me if I want to get married at H Mart. wink emoticon

Brandon playing My Little Ponies with Devyn: "I'm not going to WALK. Walking is for people who don't know how to fly!"


"Will we see dinosaurs in heaven?" —Devyn


My mom got Devyn the first three "Magic Treehouse" books. We read the first two in Dallas. Now we're on "Mummies in the Morning," and I just spent almost half an hour trying to explain a) what a ghost is, b) how the queen could be a ghost and dead mummy bones at the same time and c) how they get the wrappings to stay on a mummy. Oy vey.


Devyn is singing, "Hey! You! Get offa my cloud!" at the top of her lungs. Parenting WIN.


Brandon and Devyn are having an argument about whether or not fairies (as in, tiny creatures with wings) can marry outside their species that currently has Devyn in tears.

Me: *hissing at Brandon* It's easier just to agree!
Him: I don't want her to be a racist!


Devyn is lecturing Brandon that he needs to eat more healthy foods, like broccoli, if he wants to still be alive when she's eight.

Which is, like, REALLY old to a four year old.

"What if there was a hole in the ceiling and birds could poop in the potty?"

She calls me Master Mama, so I'm OK with that.

Devyn’s been asking to try mussels for WEEKS, so we let her order them for dinner last night at Village Tavern (much to the amusement of the waiter). She LOVED them.

(Also, Brandon thinks she looks about 22 in this photo.)
Posted by Unknown at 4:50 AM No comments: 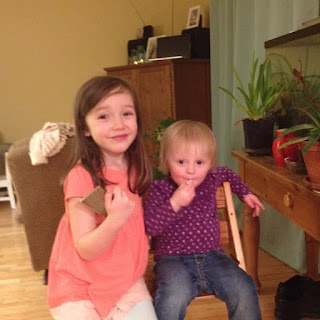